This is a list of races in or near London. Please email us if we've missed a race or need to update any details below. Happy racing! 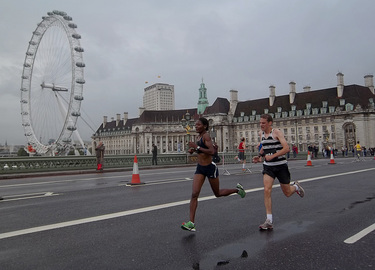 Run to the Beat | Formerly a half marathon supported by music, they've scaled it back to a 10k finishing at Wembley Park. Mid September. 15,000 entries (sells out early).

Richmond Running Festival | The only chance most of us have of running through Kew Gardens. Finishes with a music and beer festival. Also includes half marathon & kids' mile. Mid September. 6,000 entries (across all events). READ MORE

Regent's Park 10k | A late-autumn charity run (fundraising for After Adoption) on a flat course with great potential for quick times and all for a great cause. Late November. 1000+ entries.

YMCA North London 10k and Fun Runs | Held annually in Crouch End in May. From Priory Park you'll run up and through Alexandra Park. 1000+ entries (plus kids events and fun runs).

Run in the Dark | A global series of night runs (10k and 5k options) supporting paralysis research. The London race is held at Battersea Park in November. 1500+ entries.

MoRun | Several 10k runs through London parks in November fundraising for Prostate Cancer (wear your mostache)—open for ladies as well.

Santa Run | Fundraising for Starfish UK this is a popular 10k and 5k charity run where everyone is kitted out with Santa gear. Early December, Victoria Park. 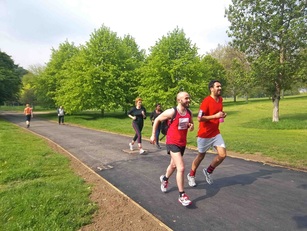 Parkrun | This is a worldwide movement of weekly Saturday morning 5k runs (not races as such, but social 5k time trials). It all started here in London, in Bushy Park, so while you’re here make sure you set aside Saturday morning to join in one of the 35 (and counting) Parkruns in London—there will be one near you. This is an essential London running experience. Free entry. Between 50 and 200 runners per event. Register online.

Brooks Last Friday of the Month | 5k race in Hyde Park with an annual series based on age graded results. Organised by Serpentine Running Club. 200 entries.

Great City Race | A corporate race over 5k around the closed streets of London’s square mile. Held on a week night in July, 5000 entries.